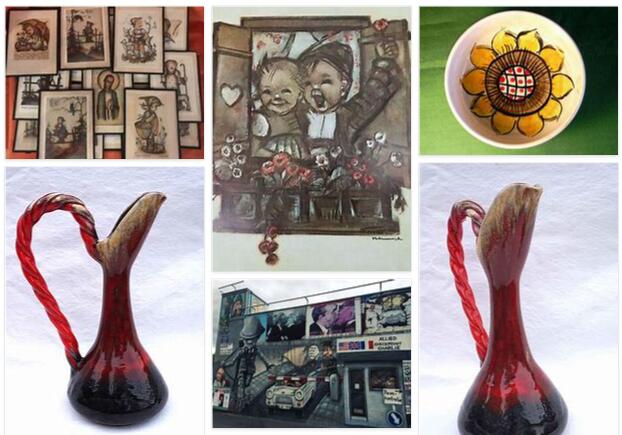 Federal Republic of Germany. – In the artistic activity of the Federal Republic of Germany of the seventies the differentiation of that art continues, which is conceptually placed beyond traditional painting and sculpture. The multiplicity of techniques develops in close contact with international conceptual art, especially that of the United States. J. Beuys, W. Vostell, S. Polke, Germany Richter, H. Haacke, U. Rückriem are the main inspirers of the generation that emerged in this decade.

At the center of this art, which in 1969 – and therefore in immediate historical proximity to the political awakening of 1968 – became known to the public through large thematic exhibitions (in Bern, Live in your head. Wenn Attitüden Form werden. Werke-Prozesse-Situationen -Informationen ; in Amsterdam, Op Losse Schroeven. Situatiës en cryptostructuren), is the work of J. Beuys.

The political aspect was particularly important in the early seventies. The problem of the social relevance of art, taken to its extreme consequences, leads us to question its very status. The political involvement of art determines a revival of the discussion on realism in traditional figurative genres (exhibitions Prinzip Realismus, 1972; Mit Kamera, Pinsel und Spritzpistole, 1973). In conceptual art, K. Staeck (b. 1938) and H. Haacke (b. 1936) find expressive forms aimed at gaining political awareness. The culmination of a socially active art, theoretically founded, emerges in documenta 6 (Kassel 1977), which however also highlights the limits of these procedures.

In these years also other artists, such as FE Walther (b.1939), K. Rinke (b.1939), U. Rückriem (b.1938), Germany Richter (b.1932), Germany Graubner (b.1930)), R. Girke (b. 1930), subject their figurative approach of the 1950s to a conceptual purification, which leads among other things to ” minimalism ” in painting and sculpture, and also involves references to ” poor art ” Italian. Artists such as R. Ruthenbeck (b.1937) and I. Knoebel (b.1940), both pupils of Beuys, continued to work consistently in this direction even in the 1980s. Like his friend B. Palermo (1943-1977), Knoebel elaborates environments conceptually complex starting from an extreme pictorial reduction of the means, but on the basis of an art concept – inspired by Malevič – more rigorous than the poetic language of Palermo. In a way that approaches the ‘total work of art’, Knoebel thus realizes that ‘new standard of vision’, postulated in the 1970s. Ruthenbeck constructs quiet and meditative objects with cloth sheets, glass plates and iron supports, whose aesthetics are defined by the interaction of materials which is accompanied by a reduction of the pictorial intervention.

Even more than the Fluxus movement, the general spread of conceptual orientation opens up to other media – in particular photography, performance and video – a space in the traditional landscape of art. Photography and video now become not only ideal means of documentation for ” actions ” and performances, but also artistic means par excellence.

Klauke (b.1943), R. Horn (b.1944) and U. Rosenbach (b.1943) are among the representatives of video art and performance in the seventies. K. Sieverding (b. 1944) and A. and BJ Blume (born 1937) exploit the alienating qualities of photography. Sieverding creates monumental blow-ups with fades, in which he investigates the cultural and ethnic conditioning of models of behavior. Blume’s photographic series show objects and people from a petty bourgeois everyday world transported into an ironic traumatic situation and connecting with each other in grotesque constellations. Important here is the breaking of the truths of thought and experience. The photographic installations of J. Gerz (b. 1940) make use of the apparent objectivity of photography and then destroy it in comparison with the texts.

According to YOUREMAILVERIFIER.COM, the video art, from its beginnings inspiring especially politics in the sixties, has been specializing his technique and expression in different directions. The ” refusal gestures ”, aimed at subverting with shock visual and auditory habits and to create a differentiated range of perceptive modalities, especially in the social sphere, are freed from a reference to individual contents and from the conceptual use of the artistic medium. W. Kahlen (b. 1940) and B. Hamann (b. 1945) can be defined as video conceptual artists. M. Odenbach (b.1953) and K. vom Bruch (b.1952) are among the youngest artists who have subjectivized social criticism in video through an autobiographical approach since the end of the 1970s. U. Rosenbach develops, in the seventies, a complex language in which performance, video and photography are intertwined ; A pupil of Beuys, this artist takes up his ” extended concept of art ” in works of feminist orientation,

In the field of conceptual art we can count procedures designated as ” individual mythologies ” (documenta 5, Kassel 1972) and ” fixation of traces ”, as well as the methods of artistic analysis of politics and society by K. Staeck and H. Haacke.

Inspirer of the ” individual mythologies ” is Beuys. Artists place themselves in a universe of individual meanings that are not formally objectified. Scenic elements are inserted into montages from various cultures, philosophies and religions. In these constructions of individual myths a cyclical conception of time is re-proposed. The debate on nature, history and ecology emerges in the various expressive forms of this orientation, which often adopts the method of work in progress. The collages of different materials by M. Buthe (b.1944), also associated with the current of the so-called Neue Prächtigkeit (“new glitz”), they mostly incorporate elements of North African culture. Extremely poor, but emanating a special aura by virtue of the material used, are the compositions with flower pollen by W. Laib (b. 1950). The collection and fixing of traces of the past, be it individual or collective, is at the center of the activity of N. Lang (b. 1941) and R. Rheinsberg (b. 1943). D. von Windheim (b. 1945) thematizes the tension between image and reproduction, detaching and fixing fragments of walls and walls.

Staeck and H. Haacke, starting from an analysis of the mechanisms of the art market and capital, have developed artistic methods and strategies which, on the basis of the alienating “ principle of affirmation ”, exploit and at the same time elude structures of the art market. In his posters and postcards Staeck uses the techniques of political photomontage (J. Heartfield) and advertising, to suddenly reveal the intrinsic contradictions inherent in the occult structures of domination and interest, as well as in the relationship with the Nazi past. of Germany. The mass production of these works intends to escape the concept of art anchored to the principle of the ” original ”, on which the art market is based.

Haacke in his works starts from similar assumptions, but further exacerbates the situation by unmasking the intertwining of art and capital – in particular the contradictory recourse to the art of entrepreneurs as sponsors – in the very place where he works: in museums and in exhibitions. With the analysis of the theme the author establishes the visual means for this purpose: photographs, texts, paintings, posters, assembled in rigorous and well calculated installations.